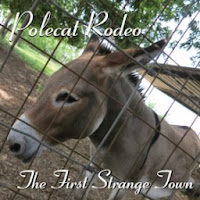 Polecat Rodeo are a Houston, Texas-based country-folk-roots-Americana trio, comprising of Blake Abbott (lead guitar and vocals), Ben Sawicki (rhythm guitar, mandolin, vocals) and Dan Fields (harmonica, pipes and vocals). Their take on their chosen genre is varied, as are their themes, which include homesickness, camp cooking and the weather, and there’s no doubting the emphasis they place on old-fashioned storytelling.

Their back-to-basics instrumentation provides plenty of rustic charm and is the perfect setting for their songs. Though they’re not adverse to cranking things up and playing some full-on country rock - “Justine” being the prime example. Abbott plays a rip-roaring solo some two thirds in and the song rolls along like a classic Charlie Chesterman number. Very cool song, too.

It’s followed by the equally compelling “Kosse, TX”, its melodic twists linger long after the music has ended, and the songs hooks are plentiful and barbed. Radio should be all over it, but that would involve them going out and finding it, so shouldn’t be relied on. I’m a sucker for a train song, and “Wrecking Trains” doesn’t disappoint. It tells the tale of Jimmy Darby and his descent into murder and mayhem, and sounds like the sort of song Harry Smith would have put on a Folkways record, back in the ‘30s – or the New Riders Of The Purple Sage might have recorded during their initial phase.
www.facebook.com/PolecatRodeo
www.polecatrodeo.bandcamp.com
Polecat Rodeo CD Baby Page
Phil S.