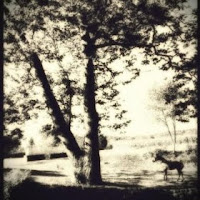 Angel Ocana – originally from Brooklyn, New York, and now based in Philadelphia – is a singer-songwriter with a keen ear for contemporary styles, yet aware of the tradition in which he operates. The results of that understanding can be heard throughout the four tracks on “White Roses”, which resonate with classic songwriting whilst traversing a number of different genres, including alternative folk, dream-pop and gentle, piano-flecked indie-rock.

Ocana’s father was a DJ, so it’s understandable that he heard lots of different music at a young age, and that curiosity and open-mindedness has obviously influenced him when it came to making his own music. For these recordings Christopher Davis-Shannon joins him on bass and Anna K Jarosz plays the fore-mentioned piano, and also sings. Together they make a sound that is enveloping and opulent, and Ocana’s songs, which are direct and candid, are sung with a slow, heavy intensity – and it’s very effective.

Though only four tracks long, the collection clocks in at over 21 minutes, as the group allow plenty of space and time for the songs to grow and develop. They understand completely the dynamics of the music they’re making, and nothing feels rushed or unfinished. First track “Fire On the Ocean” makes an ideal opening piece; the shuffling rhythm (Ocana drums), shimmering tones, the density of the arrangement (and its presentation) are spellbinding. They end with the epic “Last Train to You” – its tender, uncluttered opening evolving into a compelling production, which is wholly persuasive.
www.angelocana.tumblr.com
www.facebook.com/angelocanamusic
www.angelocana.bandcamp.com
Angel Ocana CD Baby Page
Phil S.