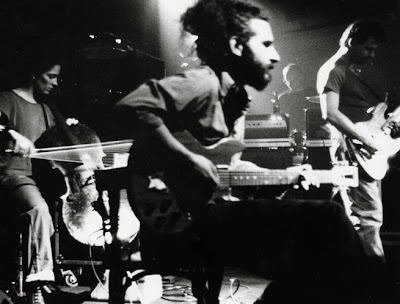 Canadian instrumental rock group Godspeed You! Black Emperor have criticised the prestigious Polaris Music Prize - the day after winning it.

However they criticised the cost of the gala ceremony in a time of austerity.

The eight-piece said they would try to use their prize to establish music education projects in Quebec prisons.

"Holding a gala during a time of austerity and normalised decline is a weird thing to do," the band said on their record label's website.

Although they said they were "grateful" to receive the prize and too "shy to complain", they argued that creating an award "just so musicians can compete against each other for a novelty-sized cheque doesn't serve the cause of righteous music at all".

The band - who were not at the ceremony in Toronto - also criticised organisers for asking car manufacturer Toyota to sponsor the $30,000 Canadian (£18,250) prize "during a summer where the melting northern ice caps are live-streaming on the internet".

Their statement concluded: "If the point of this prize and party is acknowledging music - labour performed in the name of something other than quick money, well then maybe the next celebration should happen in a cruddier hall, without the corporate banners and culture overlords."

Godspeed You! Black Emperor are known for their anarchic political views, and generally refuse to give interviews or attend industry events.

Although they formed in 1994, Allelujah! Don't Bend! Ascend! is only their fourth studio album after a 10-year hiatus. It is also their first album to chart in the UK, reaching number 41.

The Polaris Prize recognises the best Canadian album of the year, regardless of genre or sales, with the nominated records decided by more than 200 music journalists, bloggers and broadcasters across the country.

A spokesperson for the Polaris Prize was not immediately available for comment.