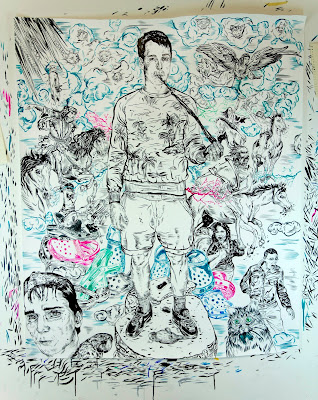 The winners have been announced for the Jerwood drawing prize 2013, the UK's largest and longest running annual open exhibition for drawing.

More than 3,000 entries were submitted this year for consideration by the independent panel of selectors.

Svetlana Fialova scooped the £8,000 top award for an ink portrait of her boyfriend "in an apathetic pose, pulling chewing gum out of his mouth".

The second prize of £5,000 was awarded to Marie von Heyl for a video work.

It shows the artist examining her London flat using her own body.

Kristian Fletcher and Tamsin Nagel were the recipients of the student awards of £2,000 each.

Life, death and the absurd

Fletcher, who recently graduated from the Prince's Drawing School, London, was honoured for his pen, pencil and charcoal drawing, The Wrench.

Berlin-born Tamsin Nagel, who studied at the Royal College of Art, London, produced the work Enclave (ii), which explores small-town notions of life, death, religion and the absurd.

They awarded special commendations to Neville Gabie for his video and chalk work entitled Experiments In Black And White VII; and to Gary Lawrence for Saint Stansted (and Other Stuff), a mixed media drawing using biro, gel, and felt pens and oil pastel on paper.

An exhibition of the winning works and other shortlisted entries will be on display at Jerwood Space in London from 11 September - 27 October 2013, followed by a tour of venues across the UK