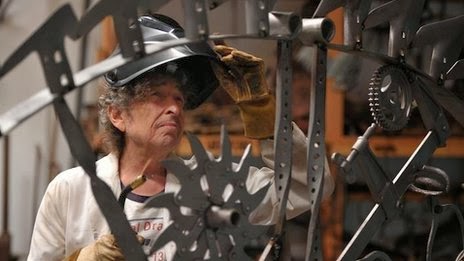 A collection of iron works by singer and artist Bob Dylan will be displayed for the first time in a major new exhibition in London.

Mood Swings, which opens at the Halcyon Gallery this November, is the outcome of Dylan's lifelong fascination with welding and metalwork.

Among the items are seven iron gates which he welded out of vintage iron and other scrap metal in his studio.

They will be shown alongside original paintings and limited editions.

"I've been around iron all my life ever since I was a kid. I was born and raised in iron ore country - where you could breathe it and smell it every day," explained Dylan.

"And I've always worked with it in one form or another."

The gates are adorned with random objects such as a wrench, a roller skate, a meat grinder and lawn tools.

The legendary singer songwriter - famous for tracks like Like A Rolling Stone and Mr Tambourine Man - also refers to his musical side by using notes, a treble clef and a guitar in the iron works.

"Gates appeal to me because of the negative space they allow," continued Dylan.

"They can be closed but at the same time they allow the seasons and breezes to enter and flow. They can shut you out or shut you in. And in some ways there is no difference."

All of the items in Mood Swings will be for sale, with a new collection of the artist's original silkscreen works on canvas featuring alongside the gates.

President of the Halcyon Gallery, Paul Green said: "While Dylan has been a committed visual artist for more than four decades, this exhibition will cast new light on one of the world's most important and influential cultural figures of our time.

"His iron works demonstrate his boundless creativity and talent. As these artworks are made at home, not on the road, they give us a rare glimpse into another part of the artist's own personal universe."

Dylan has sold more than 110 million records and continues his European tour on 10 October in Oslo. The UK leg starts in Glasgow on 18 November before winding up at London's Royal Albert Hall on 28 November.

The exhibition opens on 16 November and runs until 25 January 2014.