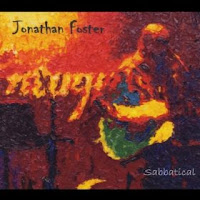 The result of a monthly songwriting and recording project, “Sabbatical” accidently morphed into an album – his first studio effort - and collects a group of songs that reflect the changes happening in his life during the period in question - while simultaneously paying tribute to fellow songwriter Sam Bragdon.

Bragdon died in 1983, and on “Sam” Foster imagines a series of scenarios, which are fictional, but roll along beautifully. He also covers a couple of Bragdon’s songs, namely “Box of Ribbons” and “Too Much Love (Much Too Late)”. Both are chock full of clever wordplay, vivid imagery – the former, especially – and contain rich melodies and hooks aplenty. Why haven’t I heard of him before?

Fortunately, Foster’s songs are just as interesting with an emphasis of deft wordplay and tunes that dig deep. He begins with the dramatic “Kingsnake”, where a shadowy aura dominates the mood, and brings to mind Joe Henry’s early records. “Sevens” is muscular and vital, and delivered with real power – both the music and words – and “Peaks & Valleys” is a road song that’s touching and uplifting, with a gentle heart.