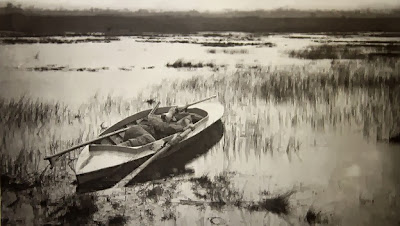 A "rare" Victorian book featuring 40 pictures of 19th Century life on the Norfolk Broads is expected to fetch about £25,000 at auction.

Showcasing the work of photographer Peter Henry Emerson, only 200 of the books were published, after which Emerson smashed the original plates.

Sarah Prior, from Keys auctioneers in Aylsham, said it was "very rare" to find "a complete copy" of the book.

She added the book "will be one of the most valuable we have ever auctioned".

Born in Cuba in 1856, Emerson moved to England as a teenager and championed a naturalistic approach to photography.

John Benjafield, a Norfolk-based expert on 19th Century photography, said Life and Landscape on the Norfolk Broads was an important part of photographic history.

"Emerson was and is regarded as the father of naturalistic photography, and was absolutely vociferous about his technique," he said.

Featuring platinum prints, they have "an exceptionally long life; you get deep shadows and bright highlights, and very luminous mid-tones. The images are breathtaking, they jump out of the page at you," he added.

The 81-page book, nearly A3 in size, came from a private collector. It includes explanations of each of the images written by Emerson and artist Thomas Frederick Goodall.

Ms Prior, book manager from Keys Fine Art Auctioneers, said: "As well as the rarity value, the book offers a unique insight into life on the Norfolk Broads, illustrating many aspects of Victorian Broadland life, including reed-cutting, eel fishing, shooting, sailing and even water-lily collecting.

"We are expecting worldwide interest from institutions, collectors and photographic historians. This will be one of the most valuable books we have ever auctioned," she said.

"We are estimating a price of between £25,000 and £30,000, but because a book such as this comes up for sale so seldom, bidding may well go beyond that figure."

The book will be auctioned on Thursday.