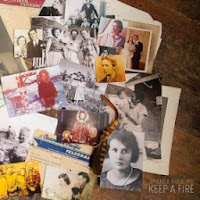 Amanda Rheaume – Keep A Fire (Independent)
Amanda Rheaume has been regularly releasing music since 2007, both EPs and albums, and playing shows all over the world, from Afghanistan and Dubai to Honduras. She’s been involved with the Babes for Breasts charity from its inception, and her “Acoustic Christmas” long-player has raised more than $30,000 for the Boys and Girls Club of Ottawa. For her latest album, Rheaume has turned to her family’s history for inspiration, turning stories into songs, and exposing a few universal truths along the way.

Her songwriting style, a hybrid of country, folk and pop, provides the perfect vehicle to get her narratives across, and whether she’s playing solo with just her guitar, or there’s a full band behind her, her vocals are mixed high, and the song is invariably the star attraction.

Perhaps the most affecting song in the collection is the near-title track “Keep a Fire in the Rain”. It tells the tale of her great grandparents, a mixed-race couple who were unwelcome in either of their communities, so had to live alone in a shack halfway between the mine, where her great grandfather worked, and her great grandmother’s Ojibwe native reserve. It’s powerful stuff, made all the more intense by Rheaume’s personal involvement, and obviously, it’s her own Métis heritage that provides the song’s foundation.

It’s just one of many excellent tracks on “Keep A Fire”, and if you’re particularly partial to story-songs, especially those that with some truth to them, then I can whole-heartedly recommend this ten-track collection.
www.amandarheaume.com
www.facebook.com/amandarheaumemusic
Amanda Rheaume CD Baby Page
Tony S.