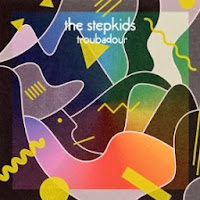 Following 2011’s electro-soul filled eponymous debut (which was placed No.25 in Mojo’s Top 50 albums of 2011), “Troubadour” spins another eccentric web of electro fusion and polished pop. Again taking inspiration from classic soul, funk, ‘80s chart fodder and psychedelia, and cutting it with a slightly left-field edge makes for something interesting and also extremely commercial.

“Desert in the Dark” and “Moving Pictures” are crowd-pleasing party pieces, “The Lottery” scratches Weather Report jazz-funk into its Todd Rundgren-style vocal, whilst “Symmetry” creates a new meeting point between Luther Vandross and Pink Floyd! The Prince-like funk of "Sweet Salvation" and the squelchy polyrhythms of "Bitter Bug" have seen the light of day previously on the "Sweet Salvation EP", released in October 2012.

The Connecticut trio of former session musicians, Tim Walsh (drums), Jeff Gitelman (guitar) and Dan Edinberg (bass) share vocal duties. Their words are sometimes a little cheesy, with unimaginative couplets - which they acknowledge as a weakness - but their musical craft and unusual combinations, and inclusions (like the banjo on “Memoirs of Grey”) more than make up for it.
www.stonesthrow.com
www.thestepkidsband.com
Willsk