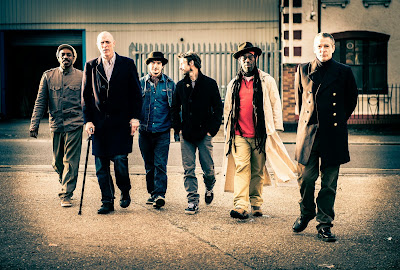 Dreadzone delighted us all back in ’96 when they flew into the commercial domain with their unique, genre-busting dub / folk / electronic dance-epic ‘Second Light’, which featured their debut top 40 hit, ‘Little Britain’.

Formed Phoenix-like from the ashes of Big Audio Dynamite, Dreadzone are an intrinsic part of the UK dance heritage. From their first album ‘360’, released in 1993 by Alan McGee on his legendary Creation Records label, through their foray into the mainstream when snapped up by Virgin Records (where labelmates included Massive Attack, Daft Punk and The Chemical Brothers), and onto 2011’s ‘The Best of Dreadzone – The Good, The Bad and The Dread’, Dreadzone have never stopped pioneering their genre-busting reggae-influenced danceable sound. They are proud to be celebrating their 20th anniversary in 2013.

‘Escapades’ is the band’s 7th studio album. Featuring guest vocalists Mick Jones (The Clash) and rising star Lena Cullen, the album was borne out of the heavy touring schedule which ensued when Greg and Leo resumed their drumming and bass duties alongside Mick Jones and Don Letts when Big Audio Dynamite reunited for a world tour in 2012.

Escapades is an album to enthuse committed fans, occasional acquaintances or those discovering Dreadzone for the very first time. There’s an equal mix of nostalgia and progression all fused within the band’s instantly recognizable sound; ‘Places’ is an upbeat Summer dance track, perfect for festivals; ‘Next Generation’ is musically light, but with a warning tale of the legacy we leave for the future; ‘Too Late’ is a gritty, bass punching number with gloriously sleazy undercurrents features a sample from ‘Is Vic There’ by New Wave 80’s band ‘Department S’, and there’s deeper, darker dub house numbers ‘I Love You Goodbye’ & ‘Fire In The Dark’, written about recent global conflicts.

Considered by many as forerunners of today’s dub and bass driven UK music scene, Dreadzone have passed the test of time, building an impressive body of work in the 20 years since an excited Alan McGhee signed them to Creation 20 years ago. A busy summer of festivals, followed by an extensive 21 date UK tour throughout autumn, will once again see Dreadzone lifting the spirits of the crowds with unique live performances of their classic tracks and highlights from ‘Escapades’.