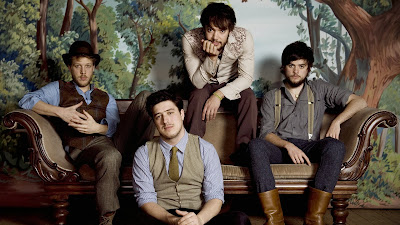 Mumford & Sons have announced that they are taking some time off making music.

The band revealed they'll be taking a long break following their latest tour.

"It feels like the last week of school right now, before school holiday when you're in high school."

When asked how long the break could last Lovett replied: "We have no idea.

"We just know we're going to take a considerable amount of time off and just go back to hanging out and having no commitments or pressure or anything like that."

The band headlined the Pyramid stage at Glastonbury Festival in June and have been touring North America throughout the summer.

"I don't think we've had actually much time in the process to be with other people and living a life outside of the band. I think that's what's in place at the moment, to do very little, especially when it comes to Mumford & Sons."

Earlier this year the band told Rolling Stone that they were trying to adjust to playing at large arenas.

"These shows take a bit more out of us," said Lovett. "We have a bigger responsibility to be in better form."

Weeks before their Glastonbury show Dwane, 28, was taken to hospital for operation to remove a blood clot from his brain.