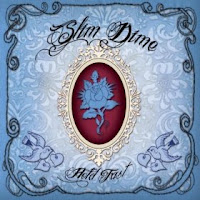 Slim Dime - Jen Land and Chris Taylor – are an acoustic, country flecked, alt. folk duo based in Melbourne, Australia who’ve been together for a decade or so - playing in various groups and configurations. The pair sing together, play guitars and banjo, and it’s that basic set-up that they’ve taken into the studio for their new record “Hold Fast”. On paper, it appears a trifle simplistic, but the arrangements and performances are utterly engaging and, because of the nature of the material, altogether timeless. The mix of old songs and original material comes together as a seamless whole and Land sings with a voice that seems steeped in 70 years of backporch, mountain songcraft.

Recorded by candlelight (which sounds like a health and safety nightmare), the combination of atmosphere, presentation and themes makes “Hold Fast” a pleasure from beginning to end; and very much an album experience rather than a collection of songs. They begin with “Candyman”, a common enough character throughout the Americana tradition, and here Land sings from the female perspective, exploring the personality of the woman who loves the Candyman. Their take on the Carter Family’s “The Coalminers Blues” moves at pace under banjo propulsion, and the haunting “Adeline” tells a tale of death in the snow, and its evocative “Oh lord I fear my gal’s lost in the snow” refrain lingers long after the song has faded.
www.facebook.com/slimdime
www.slimdime.bandcamp.com
Slim Dime CD Baby Page
Phil S.