Review: The Dead South – The Ocean Went Mad And We Were To Blame 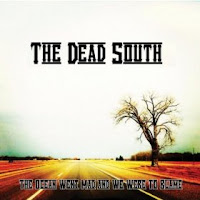 A relatively new group – the current line-up have only been together since September 2012 – The Dead South sound like they’ve been playing together for years. The Saskatchewan four-piece play a resolute form of stringband music, which harks back to the banjo propelled mountain music of the Appalachians, but comes with hard modern edge. Indeed, put them on a bill with Old Crow Medicine Show or the Mumfords and they wouldn’t sound out of place (or time).

“The Ocean Went Mad And We Were To Blame” is their debut release, a five-track EP that plays to all their strengths. Lead vocalist, Nate Hilts, sings with a voice hewn straight from the rock face and guitars, banjo and mandolin are feverously picked as if each song might be their last. The sound is underpinned by Danny Kenyon’s melancholy cello, adding both an ominous depth and an unforeseen experimental aspect to their sound.

The EP begins strongly with “Banjo Odyssey”, its innocent, old timey title disguising a song of sexual shenanigans involving cousin-lovin’ and plenty of intimidation and menace. It makes a compelling opening statement, and is followed by the equally effective “Wishing Well”, where the combination of cello and Colton Crawford’s looped banjo runs carry the dark narrative. Final cut “Honey You” is positively pop by comparison, and shows an altogether lighter side to a group who deserve all the success that comes their way. I’d love to see them in the UK…
www.facebook.com/thedeadsouth79
www.reverbnation.com/thedeadsouth2
The Dead South CD Baby Page
Phil S.