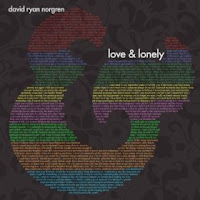 Mention one-man-bands, and I’m at that unfortunate age where the image that comes to mind is of the old fellow who used to haunt East London markets back in the ‘70s, with cymbals strapped to his legs, a bass drum on his back and a guitar up front. His repertoire would consist of ancient music hall ditties and early Beatles songs, and he was a cause of mild excitement wherever he pitched up.

San Diego based composer, singer, songwriter and multi-instrumentalist David Ryan Norgren represents a new breed of one-man-band; one that prefers the studio to street corners and probably rejects the whole notion of knee-powered percussion. That doesn’t stop him taking almost sole responsibility for the music he makes on “Love & Lonely”, writing and arranging everything, and playing an array of instruments.

He claims alcohol was imbibed to build up his courage to record the lead and harmony vocals, though there’s no sign of slurring, and both his vocals and musicianship can’t be faulted. His take on contemporary folk-pop is melodious and accessible, and draws on the past without making obvious references. He’s a clever, literate wordsmith with a talent for involving the listener, and whether it’s a quirky love song or a detail-rich dissection of an argument with a lover, his easy way with a pop hook will impress those who are captivated with Jon Brion’s solo records, Scott Brookman and Ben Folds.

He’s probably a man out of time, and it would be impossible to describe Norgren’s sound as fashionable, but there’s no doubting its quality. Songs like “Caroline”, “Fight Song” and “Midnight in Minneapolis” tap into a rich tradition of songwriting with roots in the Brill Building, and if like me, you’re generally in the market for something smart, sharp and user-friendly, Norgren may well be your man.
www.drndotcom.com
www.facebook.com/DavidRyanNorgren
www.soundcloud.com/davidrnorgren
David Ryan Norgren CD Baby Page
Phil S.