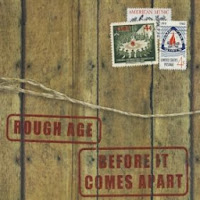 Colorado three-piece Rough Age describe themselves as a pub rock band, which probably means they perform a lot of bar gigs and play music that entertains on a basic level – nothing wrong with that. The original pub rock bands, which were mostly London based, played a variety of styles, from rambunctious R&B and country-rock, to proto-punk and power-pop, and paved the way for bands like The Clash and Sex Pistols. Though I don’t expect Rough Age to be the precursor to another musical revolution, they do mix a number of roots and rock styles on their debut long-player “Before It Comes Apart”, and parade more than enough good-time vibes to keep the most maudlin drinker happy-ish.

Their influences are drawn from both the initial UK scene – artists like Elvis Costello, Graham Parker and the Rumour, and Rockpile – and also US songwriters such as Springsteen and Zevon. Add some harder-edged alt. rock bands like Gaslight Anthem and The Hold Steady and you’re getting warm. Of course, it’s the quality of their own material that’ll ultimately mark them out from the pack, and in songwriter (and singer/guitarist) Nathan Archer they’ve struck gold. Opening number “Adelita” displays subtlety and detail, and builds angsty menace one chord at a time. “Al Jazeera” is almost jazzy by contrast - without sacrificing one iota of guitar-pop appeal - and “Summer Skies” opens their sound in much the same way early records by The Police found space. Special mentions also for the Costello-esque “Chemistry” and the contemplative “Flammable Parts”.
RoughAgeMusic.com
www.facebook.com/RoughAgeMusic
Rough Age CD Baby Page
Phil S.