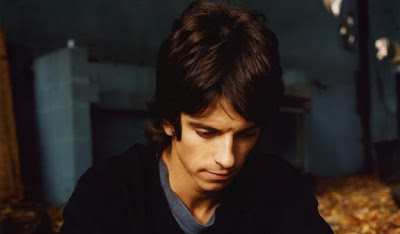 Euros Childs at Firebug, Leicester 27/10
Following some mild trouble with the PA, a short piano and guitar sound check, and a self-acknowledged schoolboy error with the snare drum, The Wellgreen kicked off their short set proper. The likeable Glaswegian duo – with their look of raven black beatnik vs ‘70s footballer - charmed their way through six numbers drawn from their 2010 debut LP, “Wellgreens” and their new release “Grin and Bear It.”

The strong two part harmonies were supported by acoustic guitar and simple snare and kick drum kit. From the skiffle tinged “Ants” the tone was bright and thoughtful with vocal forays into the upper registers (“Circles”) handled with ease and laying off the drums for “Counting All These Moments” made for a cooler, more ethereal feel. Being harmony centric it would be all to easy to assimilate Beach Boys influences in “Summer Rain” but for “Going Home” and their final number, “Red Light”, the spirit of the Everly Brothers could clearly be heard. In my view, ones to watch!

Next up was Laura J Martin a waif-like, elfin character, who emerged from some eerie sample loops of thunder and rain to which she cleverly added (and removed) live flute, melodica, mandolin loops and a pre-recorded tribal gathering. Vocally quirky and quite theatrical, there’s a Kate Bush influence at play, for sure.

Into her set, thumb piano made a show and there were great moments of Phillip Glass-like flute repetitions. “Hold It Dear” is a piano based tune with a metronomic beat and the addition of live bass and drums for “Jessie” resulted in a fast marching rhythm. On an old song, “Tom” the mandolin lent a folk tinted flair, to which a sprinkling of fairy dust was added with the nursery chimes giving a childlike innocence – a change in tempo and direction offered a mid-song “Surf’s Up” moment. Set closer, “Spy”, again with bass, was a pounding number that reminded me of ‘70’s kids programme “How”!

Announcing his arrival, in faux Japanese, nonsensical fashion, Euros Childs, backed by his supporting musicians, rocked into “Be Be High”, to begin a show of high energy, where comedy and high-jinx are integral. Between tracks from new LP, “Situation Comedy”, “Second Home”, “Avon Lady” and the smashing “Ooh La Oona”, Mr. Childs recounted a tale of his last time in Leicester for his first solo show - at a Leicester local bands showcase at the much-missed Charlotte.

Tunes taken from his reasonably large solo back catalogue included the bluesy “Oh That’s Better”, which he described as a “quieter song for a Sunday night”, the unreleased, “Horse and Cart”, a melancholy memory of being seventeen, “Parent’s Place”, a song “about a horse and not taking smack”, “Cavendish Hall”, “Tina Says” and “Goodtime Baby Talk to Me” (preceded by an anecdote of a jelly fight having taken place in the venue earlier in day). “Horse Riding” was a full throttle romp with great woo-woo backing and “Like This Then Try This” took an enigmatic fairground turn.

In tribute to Lou Reed the show is closed with a cover of “Real Good Time Together” – although “Perfect Day” may have been a better choice to end a flawless evening and a great show of good humour.
EurosChilds.co.uk
Willsk