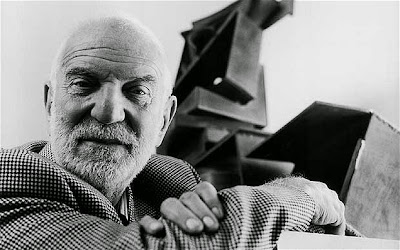 British sculptor Sir Anthony Caro has died of a heart attack at the age of 89, his family has confirmed.

Sir Anthony was widely regarded as the greatest British sculptor of his generation and worked as an assistant to Henry Moore in the 1950s.

Tate director Sir Nicholas Serota called him "one of the outstanding sculptors of the past 50 years".

Among his many prizes was 2008's Jack Goldhill Award for Sculpture for his piece Promenade.

Awarded by the Royal Academy of Arts, the £10,000 prize goes to the creator of "an outstanding piece of sculpture".

The artist had vowed to keep working until he was 100, as he unveiled his most recent exhibition at the Gagosian Gallery in London in June.

He told The Independent: "It's what I like doing. Old age is a shock, but I still enjoy making the works."

"I look forward to going into the studio. I would be bored if I didn't do that."

Sir Anthony played a pivotal role in the development of 20th Century sculpture, after first coming to public attention with a show at the Whitechapel Gallery in 1963.

There, he exhibited large abstract sculptures, such as Early One Morning (1962), which were brightly painted and stood directly on the ground to engage the spectator on a one-to-one basis.

It was a radical departure from the way sculpture had been seen in the past and paved the way for future developments in three-dimensional art.

"I did break something open at the beginning," Sir Anthony said in June.

"A tremendous lot of possibilities opened up to me when that happened, and I've been exploring these different areas for the rest of my life."

The artist added: "Sculpture did have some assumptions and some, well, rules almost and I broke those rules."

He was born in Surrey in 1924 and studied engineering at Christ's College Cambridge, before going on to specialise in sculpture at the Royal Academy Schools in London until 1952.

Sir Anthony then went on to influence others as a teacher at St Martin's School of Art in London from 1953 to 1981.

In the early 1950s he had started his own sculpting career by making rugged bronze animal and human figures, which were said to be concerned with "what it is like to be inside the body".

His more famous later work, which questioned assumptions about form, material and subject matter in sculpture, can currently be seen in a major exhibition at The Museo Correr in Venice until 27 October.

In a statement following his death, Tate director Sir Nicholas Serota called him "a man of great humility and humanity whose abundant creativity, even as he approached the age of 90, was still evident in the most recent work".

He was knighted in 1987 and received the Order of Merit in May 2000, which recognises great achievement in the fields of the arts, learning, literature and science, and he was the subject of a major retrospective at Tate Britain in 2005.

With Norman Foster and Tony Fitzpatrick he co-designed London's landmark Millennium Bridge, but the £18.2m project had to be closed down three days after it was opened in June 2000, as it swayed "alarmingly".

Engineers blamed the "synchronised footfall" effect of hundreds of people stepping in unison and it was reopened nearly two years in February 2002, after £5m of modifications.

Sir Anthony was married to painter Sheila Girling, with whom he had two sons and three grandchildren.

He had a close relationship with the Royal Academy of Arts throughout his career and chief executive Charles Saumarez Smith has paid tribute to the late Royal Academician.

"Sir Anthony Caro OM CBE RA was one of the greatest sculptors in the second half of the twentieth century," said Saumarez Smith.

"He was elected as a Senior Member of the Royal Academy on 9 March 2004 and will be much missed by the RA as well as his friends and admirers internationally."