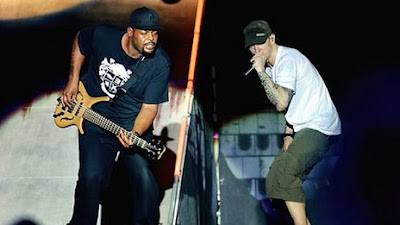 Tourists going to concerts and festivals are boosting the UK economy by as much as £2.2 billion a year.

Music tourism is also said to provide 24,000 jobs each year, a report by VisitBritain and UK Music shows.

Spending by people from the UK and abroad was worth £1.3 billion last year.

That includes buying tickets and paying for transport and accommodation plus other indirect spending, which adds another £914 million.

VisitBritain says nearly half of the average live music audience is made up of tourists, with visitors from abroad spending an average of £910 while attending festivals and £602 going to concerts.

Domestic music tourists spent, on average, £396 while attending festivals and £87 going to concerts.

London attracts 28% of all music tourists in the UK, with 1.8 million people visiting the capital.

VisitBritain chief executive Sandie Dawe said: "This report confirms that the UK's music scene has significant international appeal and that music tourists spend lots of money and travel across the whole of Britain.

"This will act as a catalyst for us all to ramp up our activity and forge better relationships with festival organisers, promoters, venues and producers to raise awareness of our amazing music scene across the world."

"Music tourism created more than 24,000 jobs. Just think what we might achieve with policies that specifically target the music tourist in this country and abroad."

To qualify as a domestic music tourist, the person had to travel at least three times the average commuting distance to attend a gig or festival.