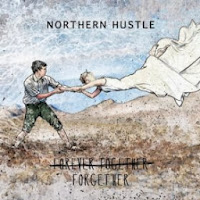 If there’s one thing that Northern Hustle doesn’t lack, it’s vision. Formed by the Arizona-based duo Drew Dunlap and Jon Malfabon, “Forgether” is the first album in what will be a trilogy of releases, which tells the story of one character’s development, how they live their life, and the relationships they form. Funded by Kickstarter, their friends and fans obviously shared their confidence in the project, and they’ve been rewarded with a collection of songs that come together extremely well. As for the story aspect, it certainly encourages serious listening, and a visit to the group’s website gains access to lyric sheets and additional artwork.

Upon its release, the lead single “Homestead” grabbed lots of attention amongst local press and radio programmes. It’s hardly surprising – their idiosyncratic take on the new folk sound includes references to Mumfords and Fleet Foxes, but also their own quirky eccentricities are given full rein, and the resulting three minutes exudes both naive indie charm and wonderful pop accessibility. It’s a formula that’s repeated frequently on “Forgether”, and the combination of story songs, fierce melodies and acoustic arrangements, make a beeline for the part of the brain that appreciates that sort of thing. Indeed, standout songs appear with a frightening regularity, from the fore mentioned “Homestead” to the grandiose “Northland”, where guest vocalist Gabby Booth makes a substantial contribution.
Northern Hustle Home
www.facebook.com/NorthernHustle
www.northernhustle.bandcamp.com
Northern Hustle CD Baby Page
Phil S.