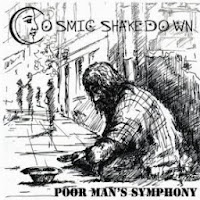 Formed in 2010, and with an EP and album already under their collective belts, Buffalo, NY quartet Cosmic Shakedown obviously like to keep busy. Their new release, a four-track EP they’ve entitled “Poor Man’s Symphony” builds on their funky, loose, hard-blues-rock style and delivers a collection that tips its hat to various combos, old and new. The guys in the band (Tony Nash: guitar/vocals, Larry Gartley: bass/vocals, Shea Rayhn: drums/vocals and Harold Pollinger: keys/vocals) find their groove instantly on opening cut “Wished Upon”, and the way they combine Hammond(y) organ and jamming electric guitar is the epitome of good time rock ‘n’ roll, whether recorded in the early ‘70s or yesterday afternoon.

Interestingly, they keep things short and sweet. All four tracks are done and dusted in a shade over twelve minutes, and solos are kept reined in. “Battle of the Common Man” is the only track over three minutes, though it’s a doozey, bringing to mind the best of the British blues-rock bands, grunge (Blind Melon, in particular) and Crazy Horse at their most flowing. The production is kept decidedly basic, which adds considerably to the experience, and when played at volume, they could be set up at the other end of the room. The remaining tracks “Sippin'” and “The Great Unrest” are equally impressive, and as with the rest of the collection, fans of any of the above should try and have a listen.
www.facebook.com/CosmicShakedown
www.reverbnation.com/cosmicshakedown
Cosmic Shakedown CD Baby Page
Phil S.