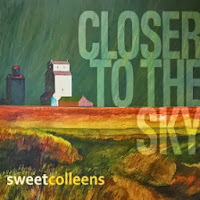 Sweet Colleens describe what they do as “fiddle-infused, accordion-fueled, celti-cajun folk pop”. It’s a bit of a mouthful but there’s nothing there to disagree with. The Minnesotans (Jeremy Greenhouse: guitar/fiddle/mandolin/harmonica/vocals, Pete Sandvik: accordion/guitar/triangle/vocals, David Bade: bass/tenor banjo/vocals, Rich Larson: guitar/vocals and Wolf Loescher: drums/percussion/bouzar/vocals, Dave Bille: guitars) tap into a rich vein of European-sourced folk styles, though at their core they remain an American band, with plenty of homegrown influences, from country rock and blues to gritty, blue-collar rock ‘n’ roll.

They’ve been playing together, in one formation or another, for well over a decade, regularly gigging in and around the Twin Cities, and as far away from home as France. Their familiarity and experience is obvious throughout their second album “Closer To The Sky”, a collection that touches on all their varied influences, and is aimed at both the head and the feet. They begin with the country flecked “California”, and although Gary Louris’ Jayhawks spring to mind, the accordion/guitar mix is refreshingly original. “Good to Be Back” is a pristine Celtic-rocker, with Stonesy “ooh-oohs” and what sounds like a pipes solo. Their Cajun influence appears on “Oh My My My (Look At That Girl)” and “The Diamond Lake Reel” is traditional British Isles dance music respectfully dragged into the 21st century.
www.sweetcolleens.com
www.facebook.com/sweetcolleens
www.reverbnation.com/sweetcolleens
Sweet Colleens CD Baby Page
Phil S.