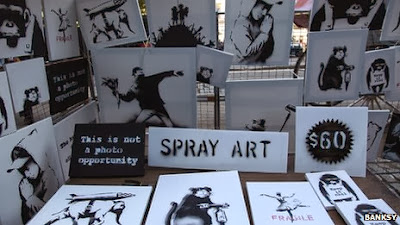 Original signed canvasses by British street artist Banksy have been sold from a stall in New York's Central Park for $60 (£38) each.

The elusive artist posted a video on his website showing a man selling what appeared to be fake Banksys.

Many of the pieces, estimated to be worth up to £20,000 each, remained unsold at the end of the day.

Banksy is in New York for a month-long residency during which he has promised a new piece of street art every day.

Entitled Better Out Than In, the public art show has its own website on to which pictures and videos of the art works have been posted.

The latest video was accompanied with the words, "Yesterday I set up a stall in the park selling 100% authentic original signed Banksy canvases. For $60 each."

The video shows an unknown older man making his first sale mid-afternoon, to a woman who buys two small canvasses for her children after negotiating a 50% discount.

Another woman from New Zealand is seen buying two of the paintings, before a man from Chicago buys four.

He tells the stall holder he has recently moved house and needs something for the walls.

Underneath the video Banksy added: "Please note: This was a one off. The stall will not be there again today."

In a recent interview conducted via email with New York publication the Village Voice, the guerilla artist - whose identity is still a secret - revealed the thinking behind his month-long trip to the city.

"I know street art can feel increasingly like the marketing wing of an art career, so I wanted to make some art without the price tag attached," he said.

"There is no gallery show or book or film. It's pointless. Which hopefully means something."

Each day in October will see a new piece of either an "elaborate graffiti, large scale street sculpture, video installation or substandard performance art".

So far they have included The Sirens of the Lambs, a slaughterhouse delivery truck filled with stuffed animal toys which toured the meatpacking district, and more traditional Banksy art such as a heart-shaped balloon covered in bandages on a Brooklyn wall.