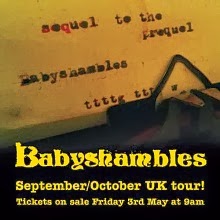 An early support slot was provided courtesy of the five-piece Loveless. Their concise debut gig didn’t involve too much movement and communication with the audience was kept to a minimum. The unsupported baritone vocals were backed in a knowingly spare and minimal manner. Quite gothic and reminding me a little of Sisters of Mercy or a darker version of Depeche Mode, and I was certain they’d break into a Joy Division cover at some point (they didn’t). Five songs in 20 minutes and they were done.

Babyshambles are touring to promote their first album in six years, “The Sequel To The Prequel”. Now over a month in, the dates are proving to be slightly less shambolic than previous excursions, with Pete Doherty bothering to turn up and not being too late! It would seem that Doherty’s move to Paris has had quite an unexpected influence, apparent when he takes the stage in an Inspector Clouseau-style mac to launch into the crowd pleasing “Delivery.”

Doherty may have moved away from the tabloid friendly drug-addicted-but-successful cartoon character of a few years back but he’s still playing the (expected) role of helpless/hopeless, self-worthless, down-at-heel romantic, and courting varying degrees of chaos. In the NME recently he stated: "Up until about three hours ago I was gonna pull the whole [tour] to be honest," he said. "I mean, why do we do it? Why do we start bands and sing songs? It's for one thing – to pull birds. And if you're finally in love with someone then you don't have to get onstage and make an arse of yourself". Anyway back to the show.

The five (occasionally six) piece band provide supportive harmonies and do a sterling job to steer the tracks in a coherent style, which allows angular guitar - with calculated dissonance and perfect discord – to mix in seamlessly, and hold the strange bedroom practice session moments in check.

Between tracks Doherty endears whether by guitar forays into the realms of randomness and slap-dash soloing, encouraging the endless flying drinks and glasses (well, plastics), reading out a senseless, cut and pasted poem from audience member (Sam the Slag), or leading a sing-a-long rendition of The Foundations’ “Build Me Up Buttercup”.

Reeling through 19 numbers, both from the past and the new album, the pace stays pretty wired, and highlights for me were the ska-ified “I Wish” (with trombone accompaniment), the jangly “Fall From Grace” (with its violin coming close to a country hoe-down), “Killamangiro”, the cover of The Ramones, “Blitzkrieg Bop” and “Albion”. “Penguins” provided a moment of intimacy and the crowd were very enthusiastic about The Libertines’ “Time For Heroes”

Playing an encore of “Fuck Forever” closed the show with extended feedback and an unannounced Doherty exit stage left. Whether you think Pete Doherty is a tosser or not, you’d have to admit he is a rather quaint, though utterly charismatic showman.