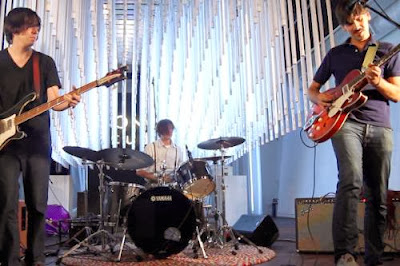 Dead Meadow at Firebug, Leicester 2/10
The scheduled support act, (psych space travelers) Strangers Family Band were unfortunately replaced by local singer-songwriter Calvin Jeffrey. His strong vocals and not so strong acoustic guitar strums made a poor replacement, and his performance seemed to be largely ignored by the testosterone heavy audience awaiting something more dense and weighty. This made for a slow start to the evening with Dead Meadow not taking the stage until 10:00pm (on a school night!).

A sedate opening of electronic tanpura drone and glitchy, pseudo-raag loop made perfect sense, whilst the oil-wheel projector warmed the effervescent light-scape before the Washington DC trio took to the stage. Appearance-wise they side-step the clichéd long and lank tie dyed look in favour of a bowl haircut and moustache for Jason Simon (vocals/guitar) and rhythm section, Steve Kille (bass) and Mark Laughlin (drums) sporting college geek looks.

There may be a certain expectation by fans of the band to stick largely to a tried and tested formula, of hard rhythm interspersed with spaced-out guitar excursions, and beyond the slow-burn opener they deliver this. Not ones for between-song discourse, the tracks segued into one another with wah-wah and heavily effected virtuosity aplenty. This is not to say monotonous, and along the way there are subtle stylistic changes with some tunes taking a more garage turn, adopting a melodious Beatles inflection or Byrdsian jangle, offering a burnt out Modern Lovers-like lyric, or great crescendos that seem to release swarms of bees! There were faster numbers - with band members becoming more animated - and slower numbers, with the debut album’s opening track, “Sleepy Silver Door” being a show highlight for me. The sound levels are worth a mention as they were uncharacteristically (and refreshingly, in my un-rock-n-roll opinion,) restrained, though the vocals could possibly have been a bit more audible.

Contemplating the audiences’ lack of females it shouldn’t come as any surprise as generally the gentler sex’s interest in loud psych-stoner dirges perhaps equates to their interest in the finer details and nuances of heavy machinery. I thought it had been a great and heady night, but my wife said: “it’s not been as bad as I thought but it’s all a bit samey”… I rest my case!
Willsk
Posted by Bangs at 10/07/2013 08:50:00 am