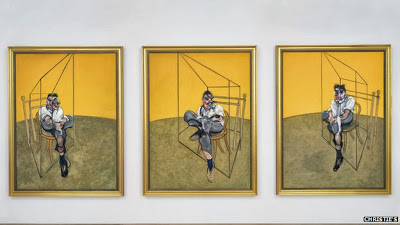 A painting by Francis Bacon of his friend and fellow artist Lucian Freud is expected to sell for at least $85m (£53m) when it is auctioned for the first time in New York next month.

The triptych, Three Studies of Lucian Freud (1969), is considered to be one of Bacon's greatest masterpieces.

It will have its first ever UK public viewing at Christie's from 13 to 18 October during Frieze Art week.

A smaller, preparatory triptych of Freud sold at auction for £23m in 2011.

Three Studies for a Portrait of Lucian Freud, painted in 1965, had been expected to sell for between £7m and £9m.

Francis Outred, head of Post-War and Contemporary Art at Christie's, Europe said the Three Studies of Lucian Freud, completed four years later, was "a true masterpiece and one of the greatest paintings to come up for auction in a current generation".

"It is an undeniable icon of 20th Century art and a painting that Bacon preserved as one of his favourites."

Outred said the first public unveiling of the complete painting in London was "quite a moment".

"The work is a very important international painting but it's also a conversation between two masters who happen to be British.

"It marks Bacon and Freud's relationship, paying tribute to the creative and emotional kinship between the two artists," he added.

Bacon and Freud met in 1945 and became close companions, painting each other on a number of occasions, before their relationship cooled during the 1970s.

Bacon, known for his triptychs, painted Three Studies of Lucian Freud in 1969 at London's Royal College of Art, after his studio was destroyed in a fire.

With its sunshine yellow background, it is an "extraordinary piece of paintwork" and one of only two existing, full length triptychs of Freud.

Exhibited in Bacon's renowned retrospective at the Grand Palais, Paris in 1971-1972, the three panels that form the painting were separated for almost fifteen years in the mid-1970s.

One panel was shown at the Tate in 1985 before the three sections were reassembled in their original splendour.

The complete work was displayed in New Haven, Connecticut in 1999.

According to the curator Martin Harrison: "Bacon was deeply distressed when the triptych was dismantled, noting on a photograph of the left panel that it was only 'a fragment of a triptych… and I think it is meaningless unless it is united with the other two panels.'

"Its reassembly into the form he intended would, if he lived to see it, have caused him profound satisfaction, given that this was among the surprisingly small number of his paintings he held in high regard."