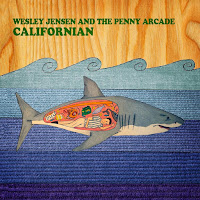 A singer-songwriter, musician, studio-engineer and illustrator – mainly pencil drawings of animals sporting bows – Wesley Jensen is a man of many talents. I’m not qualified to comment on his drawings (though I am partial to his lady hedgehog – see his website), but musically, he’s making all the right noises – literally. A native of California (the clue’s in the title), his sophomore album taps directly into the new folk tradition, and does so in ways that avoid cliché or imitation.

Of course, there are hints of other artists, from Coldplay and Fleet Foxes, to Arcade Fire and Vampire Weekend. Older artists who provide stated points of reference include Neil Young circa “On The Beach” and “Pet Sounds” period Beach Boys, but Jensen’s sound is very much of the present. The same can’t be said for his song titles. The collection begins with “Where Has the Time Gone: Brothers”, a quirky call to arms, that revels in askew percussion and rhythmic tics. It’s followed by its sister track, “Where Has the Time Gone: Solar Condos”, and Jensen’s pop instincts are fully revealed.

With an instrumental line-up that includes glockenspiel, melodica, omnichord, cellos and “noise”, together with standard guitars, basses and drums, there’s no shortage of interesting things happening, and equally, no shortage of outstanding songs. I’ve already mentioned a couple of my favourites, but it would be remiss to sign off without mentioning the propulsive pleasures of “Wherever You Go: John and Yoko” and the epic guitar sweep of “The Beach”, where those Neil Young and Beach Boys references suddenly make complete sense.
www.wesleyjensenmusic.com
www.facebook.com/Wesley-Jensen
www.wesleyjensen.bandcamp.com
Wesley Jensen and the Penny Arcade CD Baby Page
Phil S.