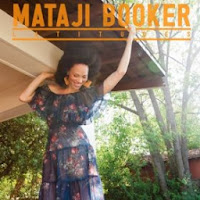 A singer-songwriter, dancer, actress and model – there are so many artistic facets to Mataji Booker that the fear must be that she spreads herself too thinly. On “Latitudes” those fears are dispelled in some considerable style. She describes her musical direction as “alt-rock/folk/jazz”, which ignores both the pop element that makes the six tracks on her debut EP so instantly appealing, and her soulful delivery, which refers back to the R&B stars of the ‘70s rather than her contemporaries. It’s a stunning mix of classic styles, with more than enough hooks for radio (and television – where she’s already making inroads).

A regular attraction at various venues in her native Los Angeles, including The Whisky, The Rainbow Room and The Knitting Factory, she’s also toured Mexico and Japan, and played gigs in Southern Europe. She brings that experience to her recordings, and the often complex songs sound road-tested and fully formed, and as a result, they’re performed with confidence. Opening cut, the title track, finds Booker in a reflective mood, the intricacies of the song and arrangement both taking their time to fully unwind. The jazzy playfulness of “Checkmate” is a musical mating dance, with gypsy violin calling the tune, and “Love Aquarius” and “Molded” are older songs, resurrected for the “Latitudes” project, but they sound very much at home, and their themes fit neatly within the EP’s conceptual premise.
www.matajibookermusic.com
www.facebook.com/matajibookermusic
Mataji Booker CD Baby Page
Phil S.