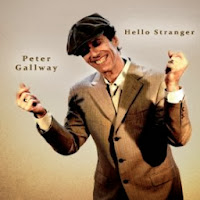 Born and raised in New York, though now based in California, Peter Gallway is a singer-songwriter-musician-producer-poet. You may have heard of him. In the ‘70s he cut a trio of albums for Warners/Reprise, later, he produced music for a host of other artists, including Laura Nyro, and helped curate the tribute release “Time and Love: the Music of Laura Nyro”, which featured contributions from Rosanne Cash and Jill Sobule. He was also responsible for the Grammy nominated “Bleecker Street: Greenwich Village in the 60’s”, featuring Jonatha Brooke, Chrissie Hynde, Marshall Crenshaw, Suzanne Vega, etc – which just happens to be one of the finest concept collections ever released.

Though obviously much in demand, he still makes time for his own projects, and “Hello Stranger” is his new album. It’s a collection of songs arranged for voice and one instrument, usually guitar or piano, and was inspired by Gallway’s earliest musical experiences, with his group The Strangers, and the music that he heard around Greenwich Village in the mid/late ‘60s. He’s also revisited songs he originally penned at the time, and for the most part they’re also influenced by the popular Motown groups of the period. Early Tom Waits makes for an easy point of reference, as does the pre-E-Street Band, Bruce Springsteen recordings. Gallway begins “Hello Stranger” with the title track; its doo-wop backing and sparse instrumentation makes for a striking launch. “Fast Freight” is dense and deep, wrapped tightly in electric guitar, and “Country Time Rhymes” reveals a gentler approach, with flowing piano working beautifully with the words. It’s an engaging record, and connects effortlessly with the listener. I’d love to hear him perform these songs live.
www.petergallway.com
Peter Gallway CD Baby Page
Phil S.