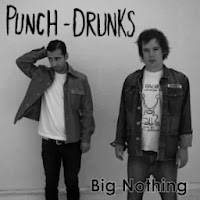 It’s temping to file Los Angeles two-piece, Punch-Drunks (Noah Justin Trevino: guitar/vocals, Devin O'Rourke: guitar/vocals), as folky-Americana, but after a few spins of “Big Nothing” it becomes obvious that their influences are far too diverse for such a simple categorization. Indeed, previous reviewers have noted their “half Cash, half Clash” split musical persona, and artists as varied as The Everly Brothers and Pavement also seem to have made an impression on the pair. The result is a sound that feels new and vital, and on their latest five-track EP, both their songs, and the unpolished production in which they’re placed, are well suited to their approach.

“Big Nothing” begins with O’Rourke’s “Like a Train”, a love-gone-wrong lament, underpinned with what sounds like the metallic jangle of a national guitar. Their languid country-blues captures the essence of the lyric completely. They’ve only been playing together since the beginning of the year, but already seem in perfect sync – like brothers, in fact. Indeed, “Howl” brings their voices together, and they’re a joy, each adding lead inflections, while the song tumbles to a close. “Nightingale” is the closest they get to a straight folk song, and it works like a charm, and the EP is concluded with “The Devil's Inside”, a little twang is injected and the lyrics seem to ponder on the acceptance of one’s circumstances – I think – wrapped up in an alt. country-indie tune.
www.punch-drunks.com
www.facebook.com/PunchDrunks
www.punch-drunks.bandcamp.com
Punch-Drunks CD Baby Page
Phil S.