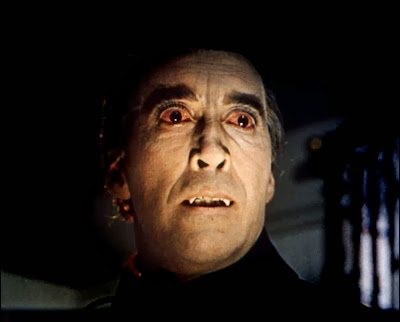 Awarded for outstanding contribution to film or television, Sir Christopher, 91, described the honour as "a great privilege".

The actor's other credits include The Wicker Man, The Man with the Golden Gun and more recently, several Tim Burton films including Sleepy Hollow.

Sir Christopher presented the award to Burton, who received the fellowship award last year, along with his partner, actress Helena Bonham Carter.

The Hammer films star has been acting for more than 60 years and has played roles in more than 250 movies.

He is best-known for his villainous roles including Bond bad guy Scaramanga and evil wizard Saruman in The Lord of the Rings.

Born into affluence, Sir Christopher can trace his lineage to Charlemagne, the first Holy Roman Emperor.

After public school he served in the Royal Air Force Volunteer Reserve during the Second World War, where he was mentioned in dispatches.

His screen career began when he joined the Rank Organisation in 1947, training as an actor in their so-called "charm school".

Yet it was his association with British studio Hammer that made him a household name, playing such iconic characters as Frankenstein's Monster, The Mummy and, of course, Dracula.

Films in competition include Catherine Breillat's Abuse of Weakness, Ritesh Batra's The Lunchbox and Jonathan Glazer's Under the Skin.