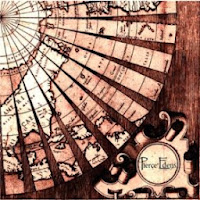 Pierce Edens’ musical education was an odd one. The Asheville, North Carolina native grew up listening almost exclusively to the folk and mountain music that dominated his local music scene – until, in his teenage years, he discovered punk and grunge. His own musical expression reflects those contradicting influences, and merges them in a way that sounds wholly natural. Of course, it’s not unknown for country-raised ex-punks to return their roots, and many of the original alt. country outfits, such as Uncle Tupelo, right through to later groups like Jim & Jennie and The Pinetops, were all comprised of musicians who had first cut their teeth in grunge and alternative bands.

Edens’ take on his chosen genre is still recognizably folk-based, but he brings a remarkable energy and urgency to his songs, which is nigh on impossible not to be swept up and away by. On stage he bangs on boxes, breaks strings and whelps and howls his way through his songs, and it’s to his credit that he’s managed to transfer so much of that vibrant intensity into a studio setting. Indeed, his latest self-titled collection almost bounces along.

On the opening track “Montana”, he sets out his stall. His blue-collar delivery and emphasis on telling it like it is, brings to mind Springsteen and relative newcomers like Gaslight Anthem, though he’s distinctly rootsier than both. Second track “Lonely” indicates a Tom Waits influence, circa “Swordfishtrombone” and “Raindogs”, though again, Edens stamps his own idiosyncratic take on the style, and on “Darlin” the mood is brilliantly interrupted by assorted strings, and some serious mountain-folk balladeering. It’s an outstanding track, as is the concluding “Mighty Mighty”, where Edens wails a chain gang blues, accompanied by juddering percussion and distorted guitar.
www.pierceedens.com
www.facebook.com/Pierce-Edens
www.reverbnation.com/pierceedens
Pierce Edens CD Baby Page
Phil S.