Stonehenge visitor centre and museum to open on 18 December 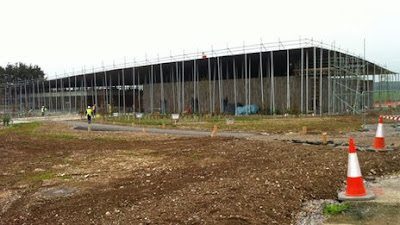 A new visitor centre at Stonehenge will open in time for the winter solstice, English Heritage has said.

The £27m project also includes grassing over the A334 alongside the ancient monument and closing another section of the busy road.

The visitor centre and museum will be located about a mile-and-a-half (2km) from the stones.

Visitors will be shuttled to Stonehenge by a little train, pulled by a Land Rover.

Stonehenge, built between 3,000 BC and 1,600 BC, is thought to have been used for a variety of religious ceremonies.

"It will give visitors a real sense of anticipation because the building is really just a stepping stone on the way to seeing the monument," she added.

Also included is a museum which will be lent artefacts found around the stones, from local collections housed in Salisbury and Devizes.

Joe Studholme, from the Salisbury Museum said for the first time visitors to the stones will be able to put the exhibits in context.

"Before people go to the stones they need to know much more about the background. Previously there hasn't been any background about the story of the stones.

"We're thrilled to be in partnership with English Heritage and to be able to tell the whole story about Stonehenge and the wonderful area.

Stonehenge is believed to have been used as an important religious site by early Britons up to 4,000 years ago
Its stones are believed to be from Pont Saeson in Pembrokeshire - more than 240 miles (386km) away
Recent pagan celebrations at the Henge began in the 20th Century
On Summer Solstice (Litha), the central altar stone aligns with the heel stone, the slaughter stone and the rising sun to the north east