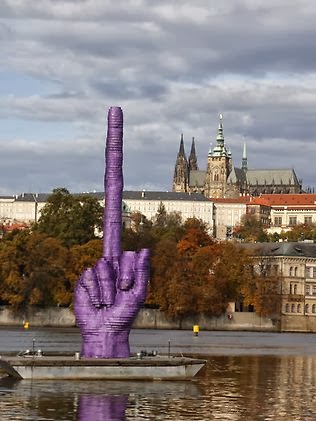 As parliamentary polls get under way in the Czech Republic this week, artist David Cerny has floated a huge purple statue of an extended middle finger down the River Vltava in Prague.

The outsized purple hand has been mounted on a barge floating on the river.

It is pointed at Prague Castle, the seat of President Milos Zeman.

Mr Cerny has shocked and mocked politicians and public figures in the past, says the BBC's Rob Cameron.

This latest piece is clearly his message to the leftist President Zeman and the political party recently set up by his supporters, our correspondent says.

It is unclear how long the finger will stay there; Cerny himself declined to say too much about the piece, telling reporters the gesture spoke for itself - what mattered, he said, was which way it was pointing.

President Zeman, meanwhile, is on an official visit to Ukraine and said he could not comment until he had seen it.

The Czech parliament was dissolved in August following weeks of turmoil in Czech politics.

Prime Minister Petr Necas's government collapsed in June amid a bribery scandal, and a government of technocrats, formed by President Zeman in July and opposed by the main political parties, resigned in August.