A painting described as the definitive portrait of Jane Austen is to be sold at auction in December. 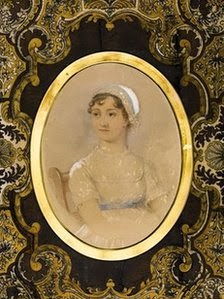 The watercolour, which has rarely been seen in public, has remained in the Austen family since it was created.

Estimated to fetch up to £200,000, it was commissioned by the author's nephew, Rev James Edward Austen-Leigh, in 1869 to accompany his biography of the author.

An engraving of the painting will appear on the new £10 note from 2017.

The portrait was based on the only confirmed portrait of Austen made during her lifetime by her sister Cassandra.

Austen-Leigh did not think his aunt's depiction was a true likeness however, so commissioned Maidenhead artist James Andrews to create a more "satisfying version" based on his own memories.

In his biography, titled Memoir of Jane Austen, he described her as "a clear brunette with a rich colour".

"She had full round cheeks, with mouth and nose small and well formed, bright hazel eyes, and brown hair forming natural curls close round her face...she never was seen, either morning or evening, without a cap."

Dr Gabriel Heaton from auction house Sotheby's said Andrews' portrait - which became the accepted image of Austen and spawned many reproductions - was "part of our cultural history".

"This is the most important likeness of Jane Austen ever likely to appear on the open market," he said.

"The painting was commissioned for the first full-length biography... which was crucial in transforming her from a novelist into a national figure.

"The portrait gave readers an image with which they could identify and which even seemed to embody the character of her work."

The painting will be sold at a Sotheby's London auction on 10 December.