Review: The Hushes – Sunlight and Fire 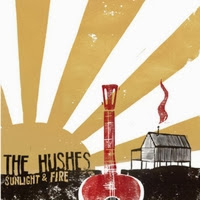 Adelaide quartet The Hushes released their much-admired debut album in early 2012, just a few weeks after forming, and quickly followed it with a live collection and a five-track EP. Since then the band (Cal Williams Jr.: guitar, vocals, Emily Davis: vocals, guitar, Kory Horwood: double bass, vocals and Ben Timbers: banjo, vocals) have been a constant on their local roots scene, growing their audience and earning themselves an enviable reputation as consummate performers.

It’s understandable why they were so eager to hit the studio so soon after coming together. Simply, they’re extremely comfortable with the recording process and the shift from live performance to recording booths and multi-takes they make seem unforced and natural. That’s no small accomplishment for a group working within their genre, where so many folk/roots/blues records sound dry and listless. The Hushes make the move seem effortless and “Sunlight and Fire” leaps from the speakers, full of fire and natural goodness.

Old blues, gospel, folk and mountain music all have parts to play in The Hushes’ repertoire, and band leader Williams is an award winning bluesman with a CV that includes playing with international names such as Ben Kweller, C.W. Stoneking, Billy Bragg and Martin Simpson. He brings all his experience to bear on “Sunlight and Fire” as he leads his bandmates through a collection of original material, traditional songs and well-chosen covers.

Beginning with the Blind Willie Johnson standard “John the Revelator”, with Davis taking the lead, the group retain much of the fiery menace that permeates the original. Their re-invention of “Black Betty” is a joy to behold, and relates back to Lead Belly’s early renditions rather than the more famous Ram Jam version, and their adaptation of Dylan’s “I Shall Be Released” is wonderfully reflective and harmonious. Of their own songs, “Mean Old Sugar Mama Blues” and “Pale Blue Dress” more than hold their own – the former could have been written 80 years ago, and the latter brings a contemporary feel to the proceedings.
www.thehushes.com
www.facebook.com/TheHushes
www.reverbnation.com/thehushes
The Hushes CD Baby Page
Phil S.