Review: Niacin Library – The Vulture And The Sun

Niacin Library – The Vulture And The Sun (Independent) 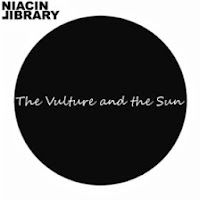 Niacin Library is one person, namely Idaho singer-songwriter Richard Guinn, and “The Vulture And The Sun” is his second EP release. It was originally planned as a ten-song, full-length album, but Guinn decided instead to select his favorite tracks, and release only them. I’ve not heard the omitted tracks, so can’t comment as to whether listeners are missing out, but these five tracks make for an interesting and enjoyable collection. Simply produced, with Guinn accompanying himself on guitar, his songs are chock full of abstract imagery and dark, quirky narratives. His overall sound is crisp and compelling, with guitar and voice given equal prominence, and leans towards indie rather than folk.

“The Vulture And The Sun” begins with “Death Woke On Saturday (Vulture of Man)”, a sprightly paean to the exploitation of one’s fellow man, hopefully expressed with his tongue firmly lodged in his cheek – but only Guinn knows for sure, and he’s not telling. “Mesa Town” starts well and gets better. Its basic premise is time travel, and he goes back in time to church and visits a morgue. His powers of description are sparse yet powerfully evocative, and on “Singapore in the Rain” he’s just as forceful, and although there are more questions asked than answered, it’s the most easily accessible, radio friendly track on the EP.
www.niacinlibrary.com
www.facebook.com/Niacin-Library
www.reverbnation.com/niacinlibrary
niacinlibrary.bandcamp.com
Niacin Library CD Baby Page
Phil S.