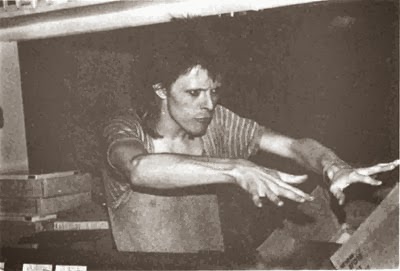 A previously unheard radio show recorded by David Bowie to promote his album Pin Ups is to be broadcast for the first time in 40 years.

The show features five tracks from Pin Ups, a covers album that features Bowie and Twiggy on the sleeve.

The recording was discovered by Nigel Reeve, who oversees Bowie's back catalogue.

He said it was a "jaw-dropping" moment when he played it for the first time.

The five songs in the show - The Pretty Things' Rosalyn, Them's Here Comes the Night, The Yardbirds' I Wish You Would, The Merseys' Sorrow and The Who's I Can't Explain - are interspersed with Bowie's own musings on the London music scene.

The show was produced by Bowie and Ken Scott, who worked with Bowie on his albums from Hunky Dory through to Pin Ups.

Reeve discovered the recording during research several years ago.

"It was in an old tape vault on 1/4" tape with simply the words 'Radio Show' written on it," he said. "This is such a rare find. No one knew of its existence, apart from David and Ken. To play it for the first time was quite simply a jaw-dropping moment."

Clips of the show will be broadcast across Wednesday on BBC 6 Music and will be available to listen to until midnight on Sunday 27 October.

Presenter Shaun Keaveny said: "It's beyond exciting for 6 Music to be showcasing the first-ever airing of this historic recording, in a year that has been all about the Bowie comeback."

David Bowie broke a 10-year silence in January, releasing a new single, Where Are We Now, completely out of the blue.

It was the first sign of his 24th studio album The Next Day, recorded in secret over two years with long-time producer Tony Visconti.

The album is nominated for the Mercury Music Prize, which will be announced on 30 October.

"As a network showcasing music of alternative spirit, David Bowie is at our core," said James Stirling, Editor, 6 Music. "It's fantastic that our listeners will have the opportunity to hear this radio show for the first time ever."