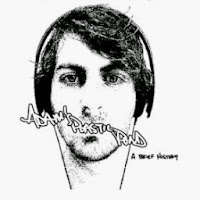 Adam’s Plastic Pond is Adam Long and his buddies. Long writes the songs, sings them and plays guitar, keys, etc. - and his buddies join in on bass, drums, piano and all those other instruments that makes a singer-songwriter sound like a band. It doesn’t always work out, but here it does. It’s very much a group recording, with no shortage of interesting dynamics and various instruments taking lead. Long’s songs are melodically robust, with ample pop hooks set in an indie-folk-rock setting. It may not be strikingly original, but there’s plenty here to enjoy, and if you’re partial to tunes that bounces around the cranium for ages after the music’s finished, then “A Brief History” may well be your new favourite LP.

I’m loath to use the term ‘power pop’, because these days it seems to come with negative connotations, but back in the genre’s heyday it referred to groups who had been influenced by great pop acts like the Beatles, Big Star and the Raspberries. Long and his (band)mates have certainly tapped into that tradition with a collection of marvelously accessible songs that, a decade ago, wouldn’t have sounded out of place on a Not Lame or Sound Asleep compilation. They’re happy mixing things up, too. “Sausalito” is grown-up country-southern-rock with a monstrous chorus and “The Take” delights in its stripped back elegance. Lead single “A Brief History of English Literature” is simply too catchy for its own good, and if musical justice existed beyond this sentence, it would likely be a massive hit.
www.adamsplasticpond.com
www.facebook.com/adamsplasticpond
Adam's Plastic Pond CD Baby Page
Phil S.