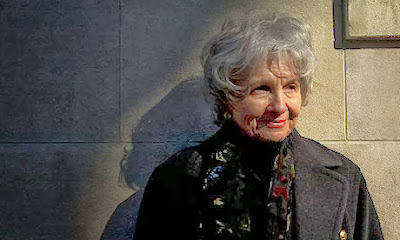 Making the announcement, Peter Englund, permanent secretary of the Swedish Academy, called her a "master of the contemporary short story".

The 82-year-old, whose books include Dear Life and Dance of the Happy Shades, is only the 13th woman to win the prize since its inception in 1901.

"I knew I was in the running, yes, but I never thought I would win," Munro told Canadian media.

Presented by the Nobel Foundation, the award - which is presented to a living writer - is worth eight million kronor (£770,000).

Mr Englund told The Associated Press that he had not been able to contact Munro ahead of the announcement so left a message on her answering machine, informing her of her win.

"She has taken an art form, the short story, which has tended to come a little bit in the shadow behind the novel, and she has cultivated it almost to perfection,'' he added.

Munro, who began writing in her teenage years, published her first story, The Dimensions of a Shadow, in 1950.

She had been studying English at the University of Western Ontario at the time.

Dance of the Happy Shades, published in 1968, was Munro's first collection, and it went on to win Canada's highest literary prize, the Governor General's Award.

In 2009, she won the Man Booker International Prize for her entire body of work - but she downplayed her achievements.

"I think maybe I was successful in doing this because I didn't have any other talents," she once said in an interview with Book Lounge.

BBC Arts Editor Will Gompertz said Munro had been "at the very top of her game since she started".

"Very few writers are her equal," he said, adding "she gets to the heart of what it is to be human".

"I thought she might not win because she's not overtly political; and of late the Nobel has tended to go to political writers."

The award "probably won't make a commercial difference" to the author, he added, but it "makes a huge difference to how her work will be viewed in historical terms".

"If she hadn't won it before she died, I think it would have been a terrible, terrible omission."

Often compared to Anton Chekhov, she is known for writing about the human spirit and a regular theme of her work is the dilemma faced by young girls growing up and coming to terms with living in a small town.

The Nobel academy praised her "finely tuned storytelling, which is characterised by clarity and psychological realism".

Munro, whose daughter woke her to tell her she had won the Nobel, said she was "terribly surprised" and "delighted".

Speaking to the Canadian Broadcasting Corporation (CBC), she said she always viewed her chances of winning as "one of those pipe dreams" that "might happen, but it probably wouldn't".

"It's the middle of the night here and I had forgotten about it all, of course," she added.

Since the 1960s, Munro has published more than a dozen collections of short stories, many of which take place in her native southwest Ontario.

Her writing has brought her several awards. She won The Commonwealth Writers' Prize, the National Book Critics Circle prize for Hateship, Friendship, Courtship, Loveship, Marriage, and is a three-time winner of the Governor General's prize.

Other notable books include Lives of Girls and Women, Who Do You Think You Are, The Progress of Love and Runaway.

In 1980, The Beggar Maid was shortlisted for the annual Booker Prize for Fiction and her stories frequently appear in publications such as the New Yorker and the Paris Review.

Several of her stories have also been adapted for the screen, including The Bear Came Over the Mountain, which became Away from Her, starring Julie Christie and Gordon Pinsent.

Munro revealed earlier this year that her latest book, Dear Life, published in 2012, would be her last.

"Perhaps, when you're my age, you don't wish to be alone as much as a writer has to be," she told Canada's National Post.

In 2009, Munro revealed she had been receiving treatment for cancer. She also had bypass surgery for a heart condition.

According to American literary critic David Homel: "She is not a socialite. She is actually rarely seen in public, and does not go on book tours.

Munro will be presented with her latest award at a formal ceremony in Stockholm on 10 December, the anniversary of the death of Alfred Nobel, who established the prize.