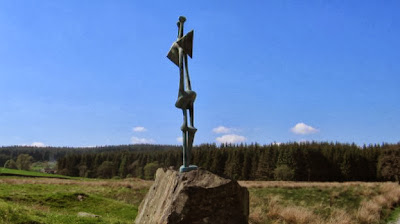 A valuable bronze sculpture by Henry Moore has been stolen from a park in south west Scotland.

Standing Figure was one of four pieces by Moore at the Glenkiln Sculpture Park in Lincluden Estate near Shawhead.

Police Scotland said the sculpture was of "high value" and have appealed for witnesses to contact them.

Standing Figure is among a string of works by the abstract artist, who died in 1986 aged 88, to be targeted by thieves in recent years.

Last November, a Henry Moore sculpture worth up to £500,000 was taken from the Henry Moore Foundation at Much Hadham, Hertfordshire.

Two men later admitted stealing The Sundial sculpture, which they then sold for £46.

The Glenkiln sculpture park was created by local landowner Sir William Keswick between 1951 and 1976.

Sir William bought Standing Figure after seeing it in an exhibition, and Moore was personally "thrilled" with the artwork's open air location.

Moore said of the project: "I don't know whether he got the idea to put sculpture on his sheep farm after he saw the Battersea Park open-air exhibition, or whether he was inspired by his experiences in China, where he had lived for many years, and where, he said, there are many examples of monumental sculptures in the open air.

"In any case, he bought this piece to put on his farm in Scotland. He placed the sculpture himself on an existing outcrop of rock.

"Later I went up there and was thrilled with the beautiful landscape and at how well he had sited 'Yon Figure'."