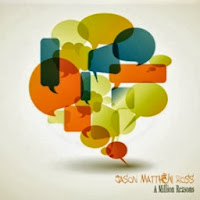 Jason Matthew Ross learnt his craft touring the Eastern US for six years with various bands. Two years ago the Raleigh, North Carolina native launched his solo career, working alone, writing and playing his own songs, and “A Million Reasons” is his second full-length album. He’s obviously a prolific writer, and his new collection effortlessly bypasses any suggestion of a sophomore slump, with powerful melodies and strong, complex lyrics that stick around long after the music has faded. He’s unafraid to tackle some of the big themes that dominate human emotional existence: love, hope and disappointment, and delivers his thoughts and words with an openness that beguiles.

There’s vein of vulnerability running throughout “A Million Reasons”, which puts the listener firmly on Ross’ side. His ability to still be surprised on “Wide Eyed Wondering” is intrinsically appealing, especially when coupled with a weeping pedal steel and a quirky country rhythm. Before that, the title track sets out his stall. A full band production places Ross and his song front and centre, and he doesn’t disappoint with a song that’s deep and clever - and doesn’t skimp on pop hooks and a memorable chorus. My favourite might be “Cold to the Touch”. It’s the longest track on the collection – over five minutes – and builds beautifully, from its lengthy intro, to its inevitable conclusion. In-between we get Americana strings, a robust, driving rhythm, and a song that grabs hold and doesn’t let go.
www.facebook.com/jasonrosstunes
www.reverbnation.com/jasonrossmusic
Jason Matthew Ross CD Baby Page
Phil S.