Morrissey opens up in autobiography 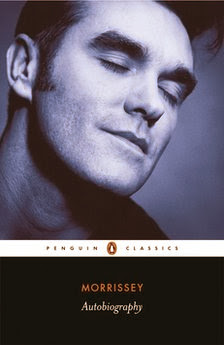 Former Smiths singer Morrissey has used his autobiography to criticise the UK legal system and music business; and revealed his first full relationship came with a man when he was in his 30s.

The star was scathing about the judges in his 1990s legal battle with former bandmate Mike Joyce, describing one as the "pride of the pipsqueakery".

The Smiths' record label Rough Trade, he said, had been "brutally drab".

And he accused music paper NME of being out to "get Morrissey" in the 1990s.

The star, who is normally protective of his private life, opened up about a relationship with Jake Walters that began in 1994.

He wrote about how Walters followed him back to his house after meeting him at a restaurant and "steps inside and stays for two years".

"For the first time in my life the eternal 'I' becomes 'we', as, finally, I can get on with someone," he wrote.

He also revealed how he later discussed having a baby - or, as he put it, a "mewling miniature monster" - with Tina Dehgani, with whom he described having an "uncluttered commitment".

Giving his version of his 1996 court battle with Joyce, who was seeking 25% of The Smiths' earnings, Morrissey accused the drummer of "constant inaccuracies and assumptions vomited out with leaden fatigue" in court.

The group, one of the most revered bands in British music, split up in 1987 after five years together.

The presiding judge, John Weeks, came in for particularly scathing criticism, portrayed caustically in the book as an "unsmiling Lord of the Hunt, with an immutable understanding of the world of The Smiths".

"The pride of the pipsqueakery, John Weeks begins his judgment by falling flat on his face: He brilliantly announces to the world how The Smiths formed in 1992 - his judicial accuracy not to be questioned!" Morrissey wrote.

Geoff Travis, who signed The Smiths to Rough Trade, was another who failed to impress Morrissey.

When the singer and guitarist Johnny Marr turned up for an appointment, Morrissey claims he waved them away and refused to listen to their music until Marr "pinned him to the swivel chair".

Travis, Morrissey drily noted, "would have found himself wandering from kaftan to kaftan" if it had not been for The Smiths, who the singer claimed "saved his life and made it count in the long run".

The singer's bitter and long-running row with the NME began, he said, when a new editor took over and "allegedly called a staff meeting at which he has passed the command that his staff writers must now 'get Morrissey'".

In 1992, the magazine questioned whether he was racist after he appeared on stage with a Union Jack. It put him on its cover under the headline: "Flying the flag or flirting with disaster?"

The singer also detailed the brutality of teachers at St Mary's school in Stretford, Manchester, where each day was "Kafka-esque in its nightmare".

One PE teacher, he recounted, "stands and stares and stands and stares" at naked boys in the shower, while another teacher was recalled for the way he rubbed anti-inflammatory cream into the young Morrissey's wrist after he had fallen over.

"At 14, I understand the meaning of the unnecessarily slow and sensual strokes, with eyes fixed to mine," Morrissey wrote.

The autobiography was published on Thursday as a Penguin Classic. It had been due for release in September, but was delayed by what Morrissey described as "a last-minute content disagreement".