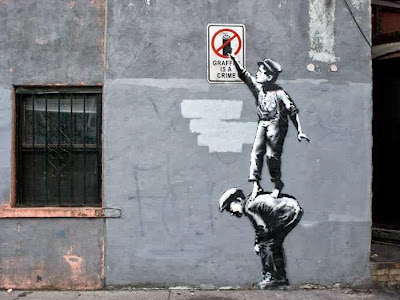 Graffiti artist Banksy, who recently began a month-long unofficial residency painting the streets of New York, has suggested he may abandon art galleries.

"I started painting on the street because it was the only venue that would give me a show," the British artist told the Village Voice.

"Now I have to keep painting on the street to prove to myself it wasn't a cynical plan," he said.

"Commercial success is a mark of failure for a graffiti artist."

"We're not supposed to be embraced in that way."

In a rare interview with the New York publication conducted via email, the self-styled guerilla artist - whose identity remains a secret - appears to regret his commercial success, which has seen celebrities such as Brad Pitt and Angelina Jolie paying millions of dollars for his artwork.

"Obviously people need to get paid - otherwise you'd only get vandalism made by part-timers and trust-fund kids," said Banksy, who is believed to be former public schoolboy Robin Gunningham.

"But it's complicated, it feels like as soon as you profit from an image you've put on the street, it magically transforms that piece into advertising."

"When graffiti isn't criminal, it loses most of its innocence."

The premise of his new project is to create a new piece of art on the streets of New York, for each day in October.

"I know street art can feel increasingly like the marketing wing of an art career, so I wanted to make some art without the price tag attached."

"There is no gallery show or book or film. It's pointless," he said. "Which hopefully means something."

However, in some quarters at least, his work appears to have been met with hostility. His first piece - entitled The Street Is In Play - which depicted two boys reaching for a spray can inside an official Graffiti is a Crime sign was defaced and painted over in less than 24 hours.

His second and third efforts were met with a similar fate: "I used to think other graffiti writers hated me because I used stencils, but they just hate me."

As promised, Banksy - who is living incognito in the US city - also unveiled videos and sculptures as part of the residency.

He claimed he had been focusing on sculpture following success with his Oscar-nominated documentary Exit Through the Gift Shop in 2010.

"I've been learning to make big sculptures out of clay - partly because it's a challenge and partly because after a year in an editing studio I wanted to do something standing up."

"It seems to me the best way to make money out of art is to not even try," said the artist, whose works have been physically cut from the concrete they were painted on and sold at auction all over the world.

"It doesn't take much to be a successful artist - all you need to do is dedicate your entire life to it."