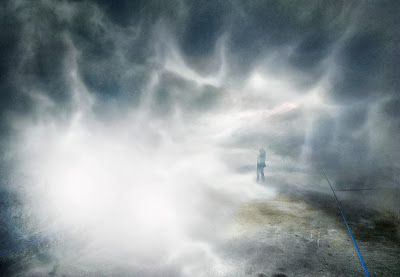 A stroboscopic art installation in Pittsburgh in the US has been temporarily closed after three visitors reported seizure-like symptoms.

The installation - titled Zee by Kurt Hentschlager - opened on Friday at the 943 Gallery, the Pittsburgh Tribune-Review reported.

An 18-year-old woman was treated at the scene on Sunday.

The exhibition is restricted to over-18s "due to intense strobe effects", according to the Pittsburgh Cultural Trust's website.

The waiver that visitors had to sign before entering the room described the installation as having "intense stroboscopic light in combination with thick artificial fog, resulting in a loss of spatial orientation".

People were warned not to go inside if they had photosensitive epilepsy, breathing or heart problems, or other issues, including claustrophobia.

Mr Sabol said that changes could be made before the exhibit reopens. Austrian artist Hentschlager could not be reached for comment at the time of writing.

According to the Pittsburgh Tribune-Review, Zee has previously been displayed in other Pittsburgh galleries. Pittsburgh Cultural Trust spokeswoman Shaunda Miles told the newspaper that some patrons had seizures at those installations as well.

The art work is scheduled to remain in the city's downtown district until 27 October but it is not yet known if and when it will reopen.

The Pittsburgh Cultural Trust described the work as "exhilarating as well as meditative, the pulsing, stroboscopic audiovisual journey that is Zee pushes the boundaries of human perception".

Chicago-based artist Hentschlager began to exhibit his work in 1983, and works predominantly with time-based media, light and sound.

In 2012, he was commissioned as part of the cultural festival running alongside the 2012 London Olympics to create CORE, a symphonic installation showcased at the Ironbridge Gorge Enginuity Museum in Shropshire.