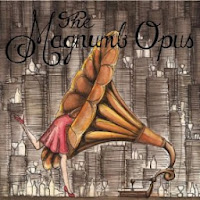 Columbus, Ohio quartet The Magnumb Opus were initially conceived when, five years ago, singer-guitarists Dan Sulka and Mike Bath attended the Pitchfork Music Festival in Chicago and convinced their trombonist friend Greg Howard to take up the drums. They’ve now released their debut record, an eight-song, full-length album, which tips its hat to contemporary artists like The National and Death Cab For Cutie, but also late ‘70s / early ‘80s post-punk, together with less regimented, folkier rock fare. It’s a pleasing mix of styles, which they play with an easy confidence that suggests they’re enjoying themselves as much as their audience.

Opening cut “Congratulations” is an early highlight, and incorporates all aspects of their sound. Sulka’s vocals seem to emanate from an entirely different time, when the initial wave of Factory bands were omnipresent on the UK indie scene, and in the US, groups like Mission Of Burma were first making waves. Musically, they’re utterly in-tune with today’s alternative sound, and would sound completely at home on one of the secondary stages at Glastonbury, or any of the major British festivals. Indeed, there’s more than enough strong material on their debut to garner that sort of attention.

Apart from the fore mentioned launch track, be sure to track down the magnificent “Mirage”, with its Banshee-esque guitar patterns and ambitious sequencing. Equally good is “New Boxes”, which comes with added pop sheen, and best of the bunch, the outstanding “Ode for a Ghost”, where Howard plays askew trombone, and the arrangement seemingly falls apart at random, and in some considerable style.
www.facebook.com/pages/The-Magnumb-Opus
www.themagnumbopus1.bandcamp.com
The Magnumb Opus CD Baby Page
Phil S.