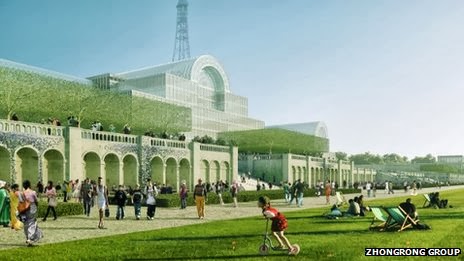 Plans to build a replica of the Crystal Palace on the site of the original Victorian building in south London have been unveiled.

ZhongRong Group wants to build a new cultural attraction and restore the surrounding park in Bromley.

The Chinese investment group announced its plans at an event with the mayor and leader of Bromley Council.

The project is expected to create more than 2,000 permanent and temporary jobs as well as attract wider investment into the local high streets.

ZhongRong Group chairman Ni Zhaoxing said: "London is renowned across the world for its history and culture and the former Crystal Palace is celebrated in China as a magnificent achievement.

"This project is a once-in-a-lifetime opportunity to bring its spirit back to life by recreating the Crystal Palace and restoring the park to its former glory."

Mayor of London Boris Johnson welcomed the announcement and said together with Bromley Council, he would work closely with the ZhongRong Group to progress the plans.

He said: "While I'm sure many people would love to see the Crystal Palace raised from the ashes, this precious parkland isn't the right place for it.

"When the palace was moved there in the 1850s the newly-laid out park was near countryside, but today it's an urban park with a lot of space already taken up by the national sports centre, car parks, roads and the caravan site."

Labour London assembly member Val Shawcross said: "I would be particularly concerned about the impact of two million additional visitors per year on local transport and road networks."

It is anticipated the new building will be the same size and scale as the original palace, which was designed by Joseph Paxton.

The cast-iron and plate-glass building housed The Great Exhibition, which featured more than 14,000 exhibitors from around the world showing off Britain's industrial achievements.

The palace and the grounds became the world's first theme park, offering education, entertainment, a rollercoaster and cricket matches, and even staged 20 FA Cup Finals between 1895 and 1914.

While the palace was in existence it was the largest glass structure in the world.

There will be a year of consultation and design development before plans are formally submitted in autumn 2014.