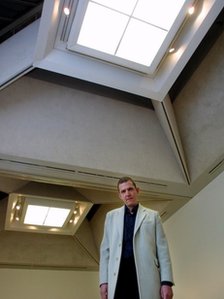 The Tate has bought Martin Creed's controversial 2001 Turner Prize-winning Work No 227: The lights going on and off to add to its permanent collection.

Consisting of an empty room in which lights switch on and off every five seconds, it caused outrage when it was first exhibited with some questioning if it should be considered art.

Several visitors walked out and one threw an egg at the wall in protest.

The work will go on display from 21 October at Tate Britain.

Tate would not say how much it acquired the piece for, however it has reportedly been valued in recent years to be worth about £110,000.

It was bought with funds raised by Tate members, the Art Fund and a private donor.

Work No 227 was first unveiled at Tate Britain after Creed made the Turner shortlist.

A spokeswoman for the gallery said the piece was "arguably one of Martin Creed's most famous works".

"It is widely considered to be his signature work, and is inseparably connected to Tate Britain," she told The Independent.

After the display ends next April, the work will be made available on the gallery's touring programme.

Creed is known for his somewhat controversial art work.

Other pieces include his 1993 piece Work No 79: some Blu-tack kneaded, rolled into a ball and depressed against a wall, Work No 88, a sheet of A4 paper crumpled into a ball and Work No 115, a doorstop fixed to a floor to let a door open only 45 degrees.

He was also behind a work which saw athletes running through the halls of Tate Britain at the start of the Cultural Olympiad; and another to open the London 2012 Festival in which people across the country rang bells for three minutes.