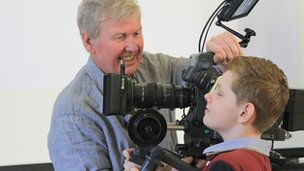 A nationwide programme of free film screenings and activities has been planned for the first National Youth Film Festival later this year.

The festival aims to give children aged five to 19 the chance to learn about film making and the film industry.

All UK schools and youth groups will have the opportunity to take pupils to the cinema free of charge.

The BFI is investing £26m of lottery funding over the next four years to deliver the project.

The festival will run from 21 October to 8 November.

Alongside screenings, young people will be able to take part in interactive workshops and Q&A sessions with industry professionals.

Teachers will also be able to use the screenings for educational purposes to coincide with topics in the curriculum.

The project is being delivered by Film Nation UK, a new charity for film education.