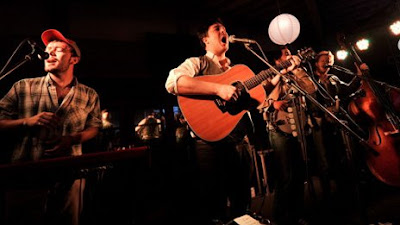 Mumford and Sons have confirmed they will play at Glastonbury this week, two weeks after their bassist had surgery for a blood clot on the brain.

The band had cancelled all shows in the run-up to the festival after Ted Dwane, 28, was taken to hospital in the US.

But keyboard player Ben Lovett told the Radio Times the musician had recovered and was "going to be OK".

"We're going to get back out on that stage at Glastonbury as four brothers and do what we do," he added.
The folk-rock band will close the festival's main stage on Sunday, sharing the bill with co-headliners The Rolling Stones and Arctic Monkeys.

Lovett said it was just five years since the band had first attended the event at Worthy Farm, Somerset, - only a couple of months after they formed.

"To have 1,000 people turn up and sit in a field and watch us play some songs... that completely blew my mind. Each time we play we're slightly out of our comfort zone," he said.

"But that's an inspiration - every time it's just a bit madder than we were expecting. But whenever we tour elsewhere then come back to Glastonbury, it always reminds us how brilliant it is to be British, and what a great British institution it is."

Dwane, who was treated in the US, posted a picture of himself bearing surgery scars on the band's website last week, accompanied by the caption: "Bear with a sore head!"

"Thanks so much for all the well wishing, it seems to be working. I'm home. Ted xx."

Mumford and Sons added in a statement: "Ted is receiving excellent care and we are being assured that he will recover quickly from surgery."

They have since announced rescheduled dates for the postponed segment of their US tour.

The 2013 Glastonbury festival opens its gates to the public on Tuesday.