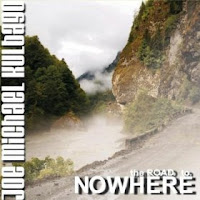 Born and raised in Northeast Ohio, and now living in Georgia, Joe Michael Kulbago has played guitar, on and off, since his High School days, ‘enjoyed’ a short stint managing a band, and grew up on a musical diet of ‘60s pop, ‘70s rock and classic country. Within the last few years he’s returned to music – playing guitar, songwriting and recording – and “The Road To Nowhere” is his second collection.

Though obviously not a big budget affair, the recording is clear and bright with a full instrumental sound. There’s an Americana feel to the material, with country and folk music providing much of the impetus, though with a sprightly, indie edge, which brings to mind the rootsier Paisley Underground bands of the ‘80s – The Long Ryders and Green On Red, in particular.

The album begins with its title track, a high, lonesome saunter along the road in question, underpinned by echoing percussion and Kulbago’s lost-boy lyrics. It’s an exceptionally good start and wouldn’t sound out of place on a David Lynch soundtrack. Final cut “Want Your Love” displays many of the same qualities, but in between there’s no shortage of first-rate tracks.

“The Storm” uses bad weather as a metaphor, which is hardly original, but still works very well, anyhow. “The Fight” combines Kulbago’s guitar and yearning vocal with a slow and purposeful piano backing, and the effect is both moving and quite timeless. And not forgetting the upbeat, garage(y) “Life of Regrets”, which somehow joins the dots between The Byrds and Jonathan Richman.
www.kulbagostudios.com
www.facebook.com/Joe-Michael-Kulbago
Joe Michael Kulbago CD Baby Page
Phil S.